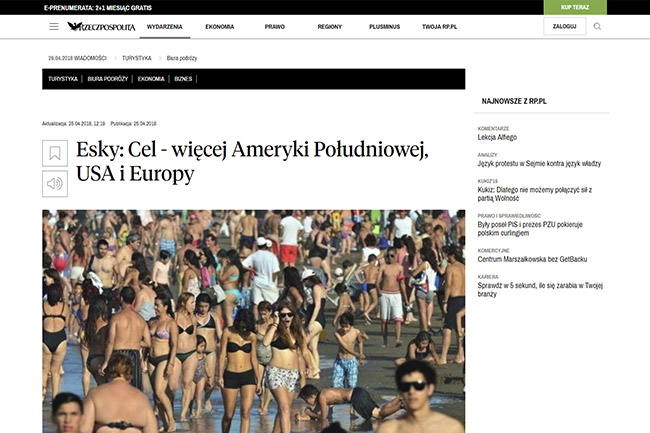 eSky: The aim – more of South America, the US, and Europe

In 2017, online travel agency eSky made almost PLN 135 million in revenue and generated around PLN 23 million of EBITDA.

Established in Poland but operating also in other countries across Eastern and Central Europe and South America, the eSky Group reported PLN 135 million in net income generated by business activity in 2017 as well as approximately PLN 23 million of EBITDA.

During the last two years, the company’s EBITDA has grown by 66 percent. In 2017 the total transaction value exceeded PLN 1,1 billion.

“For 2018 and beyond, the eSky Group plans, among other things, further expansion into South America and the United States as well as to enter selected new markets in Europe and develop the custom offers”, the company announced in a statement.

“We are growing steadily and investing not only in new markets but also in product solutions and new technologies”, the company’s vice-president, Łukasz Neska, says in a statement. “The strategy we set out several years ago proved to be successful. We hold a strong position in our key markets, such as Poland, Brazil, Romania, and Bulgaria. When it comes to other countries, our online travel agency is – or soon will be – among the three largest in terms of revenue”, he adds.

Since 2015, the eSky Group has been developing its own technological tools and solutions that enable integration of data collected from both hotels and over 100 airlines. The offer allows customers to combine flights and hotels into one booking, and choose from more than one million apartments and hotels available all over the world.

In 2018 and following years the company intends to enter markets in Argentina, Uruguay, Chile, Ecuador, Mexico, and others. It also plans to focus on the Spanish-speaking community from the United States. “As being well-familiarized with the Spanish-speaking markets, we have decided to aim our online service eDestinos.com at customers from the US. What is more, we are about to extend our business into new markets in Europe. Until now, we have been focusing on the Central Eastern region and countries such as Poland, Czech Republic, Slovakia, Hungary, Romania, Moldavia, Bulgaria or Turkey. Now, we are considering also northern and western parts of Europe”, says Neska.